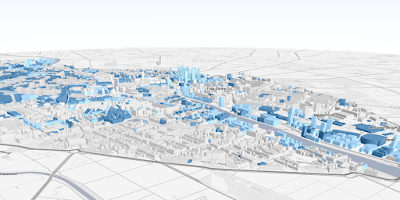 I'm happy about all the feedback about the visualization project Berlins neue Skyline.
It's time to give you more insight into the work.

The team with Julius Tröger, Moritz Klack, Christopher Möller approached me the with initial ideas early 2015. They did 3d visualizations in the past but wanted to go for something more advanced. Read more about their work here and here.

I had René Schulz supporting me in 3D modelling and data conversion aspects.

As a surprise an official city model of entire Berlin was published in summer 2015. Along with a lesser known HD model of the city center - the one we used. We were also very lucky for administration's special support and their last minute update for 2015. 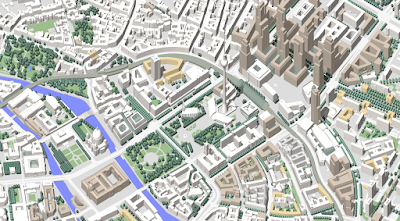 The key for all our work was to get the data converted the right way. We read the CAD files into Sketchup and exported all relevant information to OBJ format as OSM Buildings has support for it.

This transformation brought 770 MB down to 400 MB. Not bad but not acceptable to present this to users. Several attempts to slice, compress and reformat the solution came in flavor of GeoJSON.

The converter is now avaliable on Github.

Next months Morgenpost team flooded us with ideas. While almost driving us crazy, I'm very grateful as this pushed OSM Buildings massively forward and gave us a lot of insight into customer requirements.

Special thanks to Robert Buchholz (osmstreetview, flatmat.ch) as he fixed excessive tile loading by introducing a proper bounding area calculation.

For your ideas, data, support get in touch!
Eingestellt von Jan Marsch um 12:10 AM No comments: